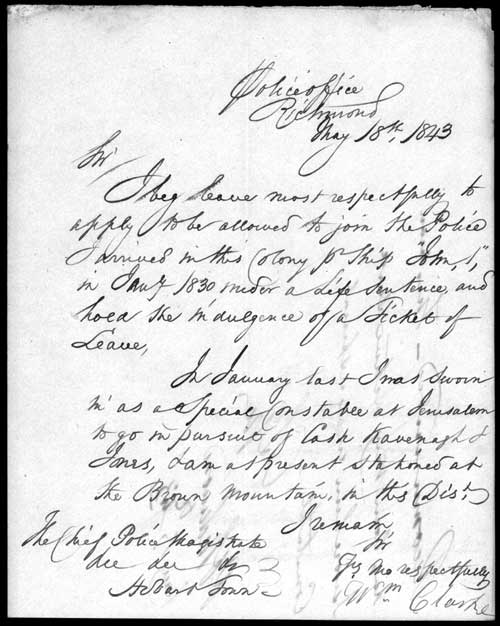 LETTER, from the Police Office at Richmond, 18th May 1843, to the Magistrate at Richmond, re William Clark, a former convict on life sentence in 1830 but eventually given a ticket of leave, sworn in January 1843 as a Special Constable to pursue convicts Cash, Kavenagh and Jones and at present stationed at Brown Mountain but now wishing to join the police force. Within the same letter a note of recommendation. Fine condition.

Martin Cash with Kavenagh and Jones successfully eluded two guards at Port Arthur. The three pursued a bushranging career on foot, robbing inns and the houses of well-to-do settlers with seeming impunity and without the use of unnecessary violence, thus earning them the reputation of 'gentlemen bushrangers'. There arrest occured in Hobart and Cash was tried for killing one of the pursuers. Some popular sympathy had been aroused for Cash, and for Kavenagh who had given himself up. Cash was sentenced to death but it was rescinded and he was remanded ultimately being sentenced to transportation for life to Norfolk Island where he stayed for ten years. Soon afterwards he returned to Tasmania and died there a property owner in 1871. (ADB Vol.I, p.214-5).