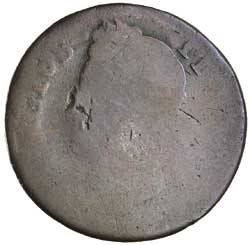 There is an opinion that this was probably given as a keepsake to a Jane Langley in 1787 (who was sent to Australia in that year) by a male relative. Jane Langley (1764-1836) was sentenced to 7 years imprisonment at the Old Bailey London in September 1785, for the theft of 5 Guineas, 9 shillings and sixpence. She was later sent to Australia aboard the famous First Fleet which sailed in May 1787 (from Portsmouth) under the command of Captain Arthur Philip RN. Along with other convicted prisoners Jane Langley arrived in Australia in January 1788. She lived until 1836 and was buried in Devonshire St Cemetery, now under Sydney's Central Railway Station.