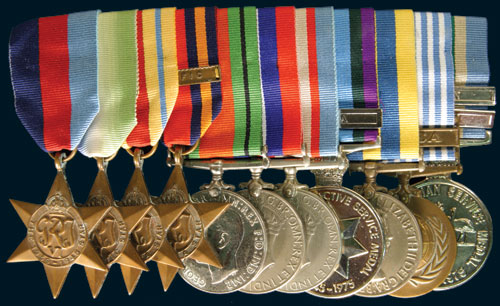 Lieutenant Commander John Haydon Guest, Enl.06Jun1939 Disch.06Jul1974. Korean War service, commissioned Gunner (Torpedo & Anti-Submarine) HMAS Bataan. Together with Greek War Star 1941-45 in box of issue, portion of photocopy of certificate for Greek War Star, medal for 40th Anniversary of Victory in the Great Patriotic War of 1941-45 (Russian Convoy Medal) in case of issue, US Navy Unit Commendation (entitled for service in HMAS Bataan in Korean War), Korean Presidential Unit Citation (no record of entitlement), 60th Anniversary of End of WWII For Service to Australia medallion in case of issue by Australian Government Department of Veterans' Affairs with accompanying official letter, cases for AASM 1945-1975 and ASM 1945-1975, set of nine swing mounted miniatures plus additional miniatures for AASM 1945-1975 and ASM 1945-1975, letter from Department of Defence (Navy Office) confirming service in HMAS Australia 29 August 1939 - 31 December 1940 as well as medal entitlement. This letter does not mention any entitlement to the Defence Medal 1939-45 so the medal seems superfluous to the group. Plus research documents.