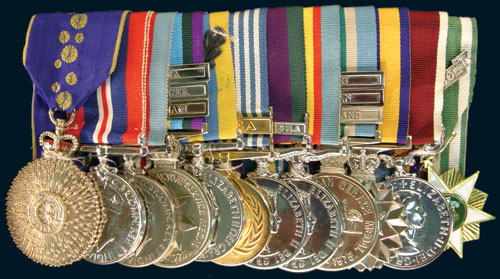 Order of Australia (AM) Queen's Birthday Honours June 1975 C.G. S113 (WOFF Rinehart AM was one of the inaugural recipients of the Order of Australia which was established on Australia Day, 26 January 1975); MID Citation: "Corporal Rinehart has completed a tour of duty as an Airframe Fitter with No. 77 (Interceptor/Fighter) Squadron, operating from a forward operational base in Korea. At all times he has displayed energy and initiative, and has performed his duties with competence and keenness, often under the most trying conditions. His excellent approach to his work has done much to maintain a high operational standard in the squadron." L.G. 17Mar1953 C.G. 19Mar1953. WOFF P F Rinehart served in WWII with No. 2 Squadron, Korean War with No. 77 Squadron and Vietnam War with No. 2 Squadron. He was invested as a Member of the Order of Australia (Military Division) on 9 March 1977. Accompanied by newspaper cutting, telegram and letter from Chief of the Air Staff (CAS) for MID as well as the MID Citation; telegram and letter from CAS for Order of Australia; photos for Korean service and one with PM John Gorton; Royal Investiture programme 9 March 1977 which was the first investiture in the Order of Australia and the first presentations of Australian awards for bravery; matching miniature group of twelve court mounted medals. With research.