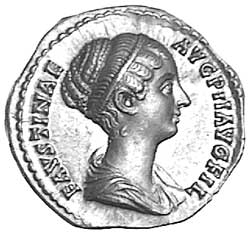 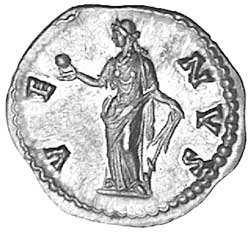 FAUSTINA JUNIOR, wife of Marcus Aurelius, (d.A.D. 175), gold aureus, (7.38 grams), issued at Rome under Antoninus Pius, obv. FAVSTINAE AVG PII AVG FIL, draped bust to right, with hair in a bun or chignon high on the back of the head, rev. VE NVS, Venus standing to left, holding apple and rudder with a dolphin entwined around the anchor, (S.-, RIC 517a, cf.C.266 (denarius), BMC RE 1065). Lightly toned, superb high relief, full flan, practically uncirculated and extremely rare in this condition.

Ex. Gerhard Hirsch, Munich, auction sale 193, February 19, 1997 (lot 75, illustrated in colour with enlargements, and estimated at 20,000DM). Venus the goddess of love was frequently utilised on the reverses of coins but only on the issue of Faustina described above is she given adjuncts of an apple and a rudder. The issue celebrates the married happiness of Faustina with Marcus Aurelius (married in 145) and the protection of this relationship by Venus even though her husband is overseas fighting against the enemies of Rome.