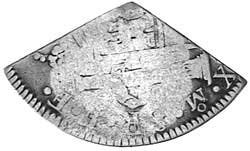 BUTESHIRE, Rothsay Mills, one shilling and eight pence, a cut one third of a Charles III Mexico City Mint eight reales (1777-84) counterstamped with 'Payable at Rothsay Mills' in a circle around a large 1/8 in relief in a sunken circle (Davis 64). Host coin good fine, countermark good very fine and rare.