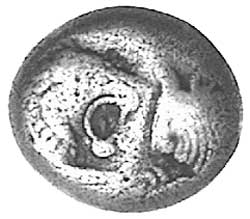 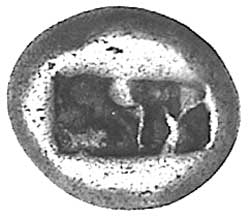 This coin is normally known as an issue by the Lydian king Croesus who throughout the ancient world he was known for his legendary wealth. The lion is the paramount symbol of royality and as such is appropriate for his Lydian kingdom. According to Herodotus, the Lydians were the first to strike gold and silver coins, but the numismatic evidence is not easily compatable with this statement. Carradice study suggests that this coin is unlikely to have been minted in the lifetime of king Croesus but is of the type he calls early 'Croeseid' (c.550-520). However Sear assigns them to king Croesus c.560-546 B.C. The issue sees the introduction of the world's first bimetallic coinage, gold and silver pieces based on a stater of pure metal weighing about 10.8 grams. This was the intial phase of relatively short duration as shortly after the gold was reduced in weight to about 8.00 grams for a stater and the silver siglos of just over 5 grams replaced the silver stater. This is an historic and important silver coin from the earliest period of beginnings of coinage in the western world.