THE VERENE COLLECTION OF BRITISH PROOFS 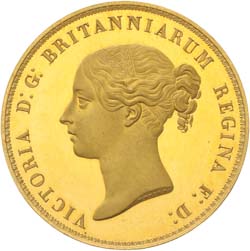 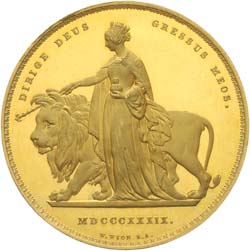 1839 PROOF UNA AND THE LION FIVE SOVEREIGNS, Victoria, 1837-1901. S-3851, W&R 278 (R4,) L&S 17. 38.56g. Lettered edge DECUS ET TUTAMEN ANNO REGNI TERTIO in small, raised letters (in relief) with rose stops. The edge translates as an ornament and a safeguard in the third year of the reign. The broad rims display a characteristic cud between 10:00 and 12:00 on the reverse indicating a late die state. Other die markers in the obverse fields confirm the dies'later state. Wyon placed a decorative border on both sides with an egg and dart design which is also characteristic of this coin. Obverse - six complete scrolls to front fillet (ribbon) and 11 full leaves to rear fillet. The legend reads VICTORIA D : G: BRITANNIARUM REGINA F : D: - translates as Victoria by the grace of God, Queen of the Britains, defender of the faith. Reverse - struck en Medaille full-length figure of Victoria as Una facing left leading the lion with DIRIGE in legend and garter star on the shoulder. In the exergue, MDCCCXXXIX under which is W.WYON. R.A. The legend reads DIRIGE DEUS GRESSUS MEOS which translates as may the Lord direct my steps, and it is thought it might have been Queen Victoria's personal prayer. Choice deep cameo proof fully sealed brilliant fields, die break rim to paw, two dried moisture spots mentioned for accuracy, one of the finest known, as such of great importance, the gem of this collection, extremely rare.