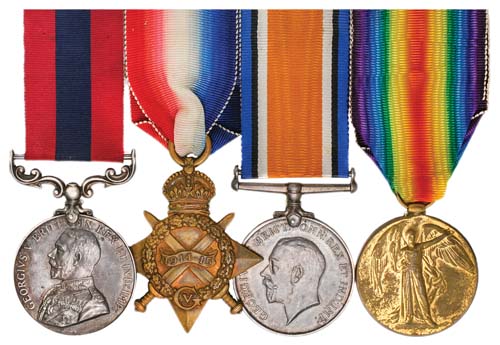 Together with gold fobs (weight and carat unknown as secured to a display board), the first a departure fob inscribed on obverse, 'JWB' and on the reverse, 'Presented/To/Private J.W.Boal/No 508/From Friends/at Kotupna/27.4.15'; the other a returned fob inscribed on reverse, 'The Great War/To/Sgt. J.Boal D.C.M./From the residents/Of/Kotupna/for services rendered/17.3.19'.

Recommendation: During the raid of 29th June, this N.C.O. distinguished himself in charge of a Bombing Party by his coolness and skill during the attack on the enemy communication trenches as well as during the retirement. The success on the right flank was in no small measure due to the soldierly example set by this N.C.O., in breaking down the determined resistance offered by the enemy.

With research including copy of Service File.