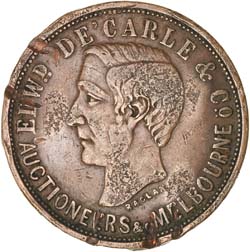 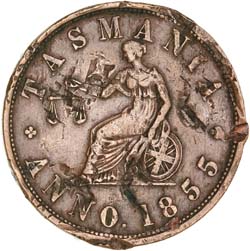 Lord Raglan was involved in the disastrous Charge of the Light Brigade in 1853, his resulting lack of popularity probably resulted in this token not being issued. Only two others known, one sold from the Fred Baldwin Collection in Sale 3 (3 Nov 1979, lot 175) the other ex H.A.Parsons, R.Jewell, and G.C.Heyde (23/3/74, lot 387) collections and later sold in Sale 26 (lot 620) and Sale 109A (lot 1166).
This example surfaced in a recent CNG auction 115 (lot 834), probably discovered in amongst miscellaneous tokens in London.