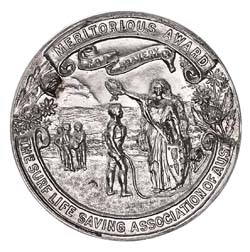 On 27 March 1937, Charles Denniss a 22 year old fisherman and champion lifesaving club member from North Entrance was not on duty but as six persons were in difficulties simultaneously in heavy seas he came to the assistance of his follow lifesavers and went to aid a man named Richard Rider of Haberfield, aged 35, in distress at The Entrance beach. He donned the surf reel belt and line and battled through the wild sea reaching the man 200 yards from the beach. However, he lost him when both were battered by huge waves and the line parted. Charles Denniss was drowned and his body was recovered some time later but the body of the man he was attempting to rescue could not be located.

As well as the above Surf Life Saving Association of Australia Meritorious Award for Bravery, the late Charles Denniss was also the recipient of a posthumous award of The Royal Shipwreck Relief and Humane Society of New South Wales gold medal and Certificate of Merit.

A bronze memorial plaque to Charles Denniss was erected at 42 Marine Parade, The Entrance Surf Lifesaving Club, The Entrance. The circular plaque with a wreath surround reads, 'Erected/By The Citizens/In Memory Of The Heroism/Of/Charles Denniss/Who Lost His Life/In An Endeavour To Save/R.Rider/27-3-1937'.