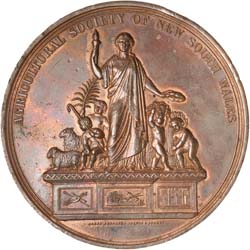 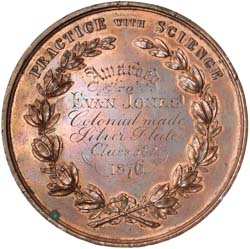 Evan Jones was born in London, England on 31 August 1846. In 1855 his family migrated to New South Wales and after finishing school he was apprenticed to a goldsmith in Hunter Street, Sydney. After completing his apprenticeship he established his own business at 15 Hunter Street and later moved a few doors away to number 11. By 1875 he was operating from premises at 494 George Street and the Royal Arcade dealing in watches and manufacturing a wide variety of jewellery, silverware, Masonic medals, presentation pieces and medalets. He exhibited at many shows and won several awards for his craftsmanship in silverware and other silver and gold creations. He was also an alderman on the Sydney City Council from 1882 to 1917 during which time he was very active on various committees. He is best known in numismatic and militaria circles for his manufacture of the Lord Mayor's Soudan Medal in 1885. Evan Jones died at Mosman on 10 May 1917 and was buried at Waverley Cemetery.