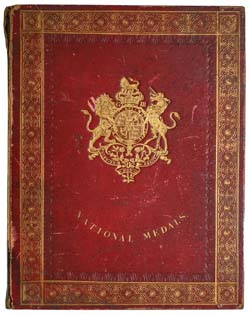 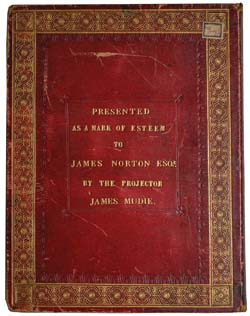 MUDIE'S NATIONAL MEDALS SERIES, a complete series of 40 bronze medals for British Military and Naval Victories (Eimer 1136 where each of the 40 medals is recorded), housed in two trays of 20 medals each and stored in a book-style holder, the front of which bears the gold blocked Royal arms and below the title 'NATIONAL MEDALS', on the spine is gold blocked with the title 'SERIES/of/MEDALS/on/BRITISH/VICTORIES' and decorated with several facing lion's head images, the cover has a swing clip at the opening side for secure closing, on the back cover is gold blocked, 'PRESENTED/AS A MARK OF ESTEEM/TO/JAMES NORTON ESQr./BY THE PROJECTOR/JAMES MUDIE.' ; also An Historical and Critical Account of A Grand Series of National Medals, Published under the Direction of James Mudie, Esq. and dedicated by permission To His Most Excellent Majesty George the Fourth, published London 1820, on the inside cover is a seal, 'Bound/By/W. Moffitt/No.23/Pitt Street/Sydney', hard cover with gold blocking pattern, 151pp, on the spine is gold blocked, 'MUDIE'S/NATIONAL/MEDALS'. Both books with some loss of colour and material at edges and the first with a loose cover, otherwise good, the medals mostly toned nearly uncirculated, and a rare and unique presentation set. (Set of 40 in book-style case + book)

James Norton was born on 27 July 1795 at Hastings, England. After qualifying as an attorney he migrated to New South Wales arriving at Sydney in September 1818. His father, brother and three sisters later followed him and the family received a large land grant in the Mulgoa District with nearly a ten kilometre frontage to the Nepean River. James Norton also received a land grant nearby which he farmed. In addition, as there were only a small number of solicitors in Sydney, his legal business thrived and by 1826 he took in a partner, William Barker.

James married in January 1824 and had eight sons and two daughters. In 1825 he became the first registrar of the archdeaconry of Sydney serving for thirty years. He was a shareholder in the Australian Agricultural Company and from April 1826 a director of the Bank of Australia until its failure in 1843. He was also a director of the Bank of New South Wales from February 1823 until he resigned in May 1826. In 1834 he bought Elswick, a thirty hectare estate on Parramatta Road where he developed a wonderful garden and orchard. As well as his residence he also provided a row of cottages behind the house for his convict servants. In 1841 he won several prizes for his displays at the Australian Floral and Horticultural Society Exhibition.

James' wife died at Elswick on 23 March 1840 and he re-married on 1 February 1843 and they had three sons and two daughters. He was nominated for the first Legislative Council on 16 September 1856 and worked on many legal bills however due to ill health he contributed little after 1859 and his term expired on 13 May 1861. James Norton died on 31 August 1862 at Elswick. The Elswick Estate was bounded by what is now Parramatta Road, Norton Street named in honour of James Norton, Marion Street and Elswick Street at Leichhardt. In 1882 it was sub-divided and offered for sale as 600 lots.