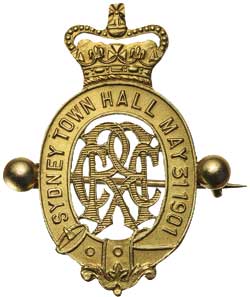 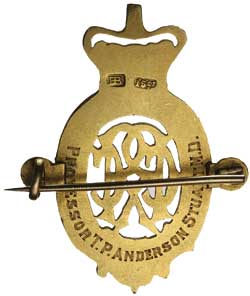 Professor T.P. Anderson Stuart MD, President of Prince Alfred Hospital was involved in events during the Sydney Royal Visit as he was a member of the Executive Committee to celebrate the Consummation of the Commonwealth by the Opening of the First Federal Parliament to be held in the Royal Agricultural Grounds in May 1901. Also as Chairman of Directors of Prince Alfred Hospital he welcomed the Duke at the hospital on the morning of the 31st May before delivering a long address outlining the hospital's history since it opened in 1883. The Duke then laid the foundation stone of the new Queen Victoria Memorial Pavilion. Chiselled on the corner stone of the new pavilion was the following inscription, 'This memorial stone of these Victoria memorial pavilions was placed by H.R.H. the Duke of Cornwall and York on May 31, 1901. Anderson Stuart, M.D., LL.D, chairman of directors.'

Also on 31 May 1901, the Citizen's Royal Reception Committee organised a state concert at Sydney Town Hall. The concert featured the Amateur Orchestral Society playing the overture to 'Tannhauser' while the Liedertafel and Philharmonic Societies chose popular works with the vocalists being Antoinette Trebelli-Delores from London and Madame Belle Cole and Philip Newbury both from America and as well, Mr Joseph Massey gave an organ recital before arrival of the Royal guests.

Sir Thomas Peter Anderson Stuart (1856-1920), professor of physiology and medical administrator, was born on 20 June 1856 at Dumfries, Scotland and was educated at Dumfries Academy until aged 14. Although he was apprenticed to a pharmacist and had passed his preliminary examinations at 16, he was prevented by regulations from sitting for his finals until he reached the age of 21. In 1874 after passing the preliminary examinations for entry into medicine at the University of Edinburgh he spent a year in Wolfenbuttel, Germany, improving his French and German. He returned to university in late 1875 and during his course of studies he was awarded ten medals in various subjects, and topped his final year in 1880 with first-class honours and a gold medal. He then spent a year at Strassburg, studying biochemistry and pharmacology, studying the physiological properties of the salts of nickel and cobalt, work that he later wrote up as his doctoral thesis which won him another gold medal. Becoming chief demonstrator in 1881 to William Rutherford, professor of physiology at Edinburgh, in mid-1882 he accepted the chair of anatomy and physiology at the University of Sydney.

Professor Anderson Stuart and his wife embarked on the ship Parramatta, arriving in Sydney in March 1883. He began work in what is now called the Old Geology Building and it was through his agitation and perseverance that the university senate approached the government for funds for a better building and in June 1884 the university agreed to build a permanent medical school with plans drawn up by James Barnet, the government architect. These were approved in November and construction began and although greater than originally planned, in April 1889 it was substantially complete, but interior fitting out continued until 1892. Today, this structure forming the south range of the old medical school, as it now stands, is a masterpiece of Victorian Gothic Revival.

The years 1883-1912 were ones of extraordinary activity for Anderson Stuart, Dean of Medicine and Fellow of the Senate at the university (1883-1920) and the undergraduate enrolment in medicine rose and staff also increased substantially. Anderson Stuart, known to the undergraduates as 'Andy', was also an illuminating lecturer who went to great pains in preparing his blackboard diagrams and founded the Sydney University Medical Society to assist students. He even managed some modest research activity of his own on the structure of the eye and on the function of the epiglottis and larynx.

In 1901 he was appointed honorary secretary, soon chairman, of (Royal) Prince Alfred Hospital. From this time Anderson Stuart's attention was focused on the development of the hospital and he devoted himself to a massive building programme. In addition to his university posts, from 1893 to 1896 he was Medical Advisor to the government, Emigration Officer for Port Jackson and President of the Board of Health and after his presidency he remained a member of the board until his death. He was also at various times president of such community organisations as the Highland Society, the Royal and (Royal) Zoological Societies of New South Wales, the Civil Ambulance and Transport Brigade, the British Seaman's Guild and the local branch of the British Immigration League of Australia and a founding executive member of the State Division of the British Red Cross Society (1914) and Deputy Grand Master of United Grand Lodge of New South Wales. He belonged to the Union and Australian Clubs and was even a patron of the Double Bay Pastime Cricket Club.

At university he was primarily responsible for the establishment of the School of Dentistry in 1901 and in 1905 became the first president of the United Dental Hospital of Sydney, having overcome the opposition of American-trained dentists. Anderson Stuart was also to the fore in establishing the Department of Veterinary Science in 1909.

Anderson Stuart's wife, from whom he was separated, died from an overdose of morphia at their home in 1886. Some years later, on 18 September 1894, he married 19-year-old Dorothy Primrose, a granddaughter of Bouviere Primrose who was an uncle of Lord Rosebery and the couple resided at Lincludin, a fine house in Fairfax Road, Double Bay.

He received honorary doctorates from the universities of Edinburgh (LL.D., 1900) and Durham (D.Sc., 1912), and was knighted in 1914.
Although Sir Thomas destroyed his personal papers, on his death-bed he dictated lengthy biographical memoirs. Anderson Stuart died at his Double Bay home on 29 February 1920 and is buried in the Presbyterian section of South Head Cemetery. His wife and their four sons, two of whom became medical practitioners, survived him.

The Victoria and Albert pavilions at R.P.A.H. and the old medical school building at the university are appropriate monuments to his greatness. Marble busts of Anderson Stuart by James White are held by R.P.A.H. and by the University of Sydney which also holds a fine portrait by John Longstaff. His name is also honoured by various details on the medical school building which was formally named after him in January 1960 with his family arms surmounting the eastern portal; his crest is on a gable on the north-west range and rendered in stained glass beside the south portal. He is also represented as a stone crow, sculptured by Tomaso Sani, high above the eastern portal, commemorating his student nickname of' Coracoid' (from the Latin word corax, meaning a crow), earned because of his prominent nose and somewhat priggish personality.