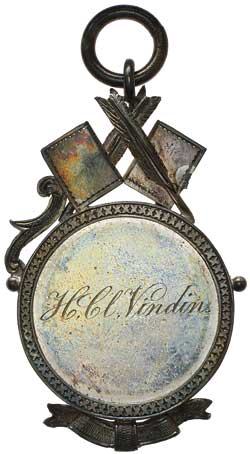 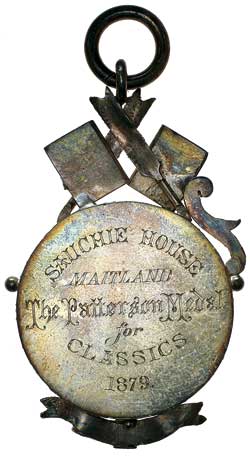 SAUCHI HOUSE MAITLAND, (1879), prize medal in silver (32x54mm), hollow medal (5.8mm thick), with suspension ring, plain disc centre with decorative surround with crossed quill pens, books and a scroll at each side (one missing) and a ribbon scroll at base of medal, obverse inscribed, 'H.Cl.Vindin', reverse inscribed, 'Sauchi House/Maitland/The Patterson Medal/for/Classics/1879.' In box of issue, this damaged and with label on lid which will damage surface if removed, medal with hairlines, trace of a fingerprint at top edge, otherwise good very fine.

Herbert Claude Vindin, born 22 July 1863 at Maitland the son of Alfred Vindin and Mary Ann Lloyd. He died at Chatswood on 25 July 1919. The Vindin family was prominent in the Maitland area with various family members owning companies, being in senior positions on many important committees and one was the local magistrate.

Sauchie House was erected in Church Street, West Maitland by Dr John Fraser in the 1830s. In 1864 he conducted a boys' school at the property until his retirement in 1883 and then the NSW Education Department leased the property from him to open Maitland Boys' High School. This continued until the old Sauchie House building was demolished in 1966 to make way for more modern facilities.

There were two Patterson Medals awarded each year, the annual gift of a former pupil of Sauchie House.