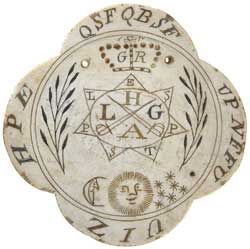 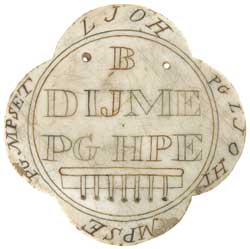 VINTAGE MASONIC NECK JEWEL, (c1790s), handcrafted in ivory (or bone) roughly in the shape of a four leaf clover-like cross (approx 92x93mm), obverse, seven pointed star with a letter in each point representing the seven churches of revelation, namely E(phesus), S(myrna), P(erganios), T(hyatira), S(ardis), P(hiladelphia), L(aodicea), inside the star is a circle with crossed swords and in each angle is a letter, H, G, A, L, at the sides of the star a laurel spray, at the bottom a moon, sun and stars, and at the top, a crown with the monarch's initials, 'GR', at each side of the crown a pierced hole for suspension, at each arm end of the cross a series of crpytographic letters, 'QSFQBSF UP NFFU UIZ HPE' (PREPARE TO MEET THY GOD), reverse, another series of cryptographic letters in the centre and around each arm end of the cross, 'B DIJME PG HPE LJOH PG LJOHT MPSE PG MPSET' (A CHILD OF GOD KING OF KINGS LORD OF LORDS), at the lower half of the centre circle is what looks like a scroll with seven tabs ready to be unfurled. Some chipping at edges, otherwise fine and rare.

As was sometimes done on Masonic medals and messages, in keeping with the organisation's secrecy, the text on the medal is written as a cryptograph. In this case the message is based on a sliding scale where the alphabet moves one letter to the right, for example GOD encrypts as HPE i.e. G(H)O(P)D(E).

The meaning of the letters HGLA is unknown. Possibly the order should be read as HAGL and the meaning is Hiram Abiff Grand Lodge. Hiram Abiff was the principal architect of King Solomon's temple and he was killed in the temple by three ruffians when he refused to disclose Master Masons' secret passwords. This story forms a part of a candidates initiation into the Third Degree of Freemasonry or induction as a Master Mason.

Vendor states this item is of Australian origin c1790s. There were no Masonic lodges formed in Australia until 1820 so this item was possibly made by a British soldier, sailor or even a convict who had arrived in the new colony and was a member of a lodge in England, Scotland or Ireland.
It is of interest to note that the images of a moon, sun and stars was also a feature of the Charlotte Medal made by a convict on the First Fleet when it arrived at Botany Bay in 1788.