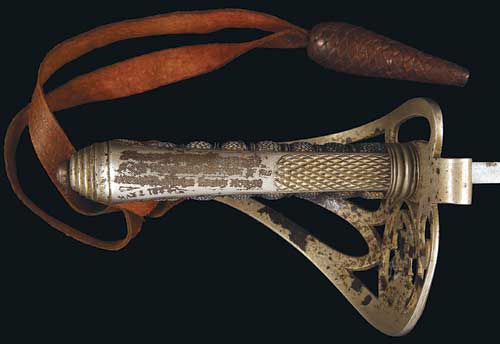 WITHDRAWN, sword was actually presented to 'Harry' Chauvel's father, Captain C.H.E.Chauvel. Presentation sword to Captain Harry Chauvel, Army officer's dress sword, etch decorated blade with crowned cypher QVC on each side, at the guard base the maker's name, 'T.T.Jones/& Son/Sydney' on one side and on the other an inset gilt PROOF disc within a sunburst, the steel guard features a voided strung bugle horn badge with Queen's crown, the sharkskin grip is wire wrapped and on the grip backing plate is inscribed, 'Presented to Capt Chauvel/By the Members & Officers of the/Upper Clarence Light Horse/May 2 1888', the plated steel scabbard is engraved on one side, 'Presented to Capt CHAUVEL/COMMANDANT of the UPPER CLARENCE LIGHT HORSE/by the MEMBERS & OFFICERS as a MARK/of their high Appreciation of his/SERVICES rendered in the corps./May 2nd 1888.', with a leather sword knot attached to guard. Back of guard with loss of plating on engraved section and light rusting on some other areas, wear to plating on scabbard near top suspension ring and inscription on scabbard worn due to polishing, blade free of rust, overall fine and rare.

Henry George Chauvel was born at Tabulam, NSW, on 16 April 1865, his father being a grazier with a very large station of 96,000 acres running 12,000 head of cattle and 320 horses. From a young age he was known as Harry. He was educated at Mr Belcher's School near Goulburn, then at Sydney Grammar School from 1874-1880 where he served as a Lance Corporal with the cadet unit and Toowoomba Grammar School from 1881-1882. In 1886 he was commissioned as a Second Lieutenant in the Upper Clarence Light Horse, one of two units of cavalry that his father was given permission to form.

After suffering the effects of a series of severe droughts, in 1888 Harry's father sold the station and purchased a small farm of 12,000 acres at Canning Downs on the Darling Downs in Queensland. In 1889 Harry resigned his commission in the NSW Military Forces and embarked on a tour of Europe. On 9 January 1890 he was commissioned, once again as a Second Lieutenant, in the Queensland Mounted Infantry and in June 1890 was promoted to Lieutenant. In March 1891 his unit was called upon during the Australian shearers' strike. In 1896 he became a full-time regular officer with the Queensland Military Forces and was part of the Queensland Contingent to the 1897 Diamond Jubilee of Queen Victoria in the UK.

During the Boer War, Harry commanded a company of the Queensland Mounted Infantry with distinction. He was given a mixed nationality group of mounted troops and this became known as Chauvel's Mounted Infantry. For his services he was appointed a Companion of the Order of St Michael and St George (CMG) and mentioned in Despatches. By the time he had returned to Australia, now the Commonwealth of Australia after federation, he was an officer in the Australian Army. In 1902 he was appointed Lieutenant Colonel to command the 7th Commonwealth Light Horse raised for service in South Africa. Before the unit arrived in South Africa the war had finished. The unit returned home to be disbanded but Chauvel remained in South Africa to tour the battlefields. On his return he was appointed Staff Officer, Northern Military District. For the next several years he was moved to postings in various states mostly to implement various training aspects of the Army.

In 1913 he was promoted to Colonel and became the Australian representative on the Imperial General Staff in the UK. However, while he was en route to England, war broke out. Colonel Chauvel arranged for the AIF to be diverted to Egypt where in December of 1914 he joined his new command, the 1st Light Horse Brigade. In May 1915 he was sent to Gallipoli where he assumed responsibility for some of the dangerous areas of the campaign including Courtney's Post, Pope's Hill, Quinn's Post and Steele's Post from Colonel Monash. In November 1915 he assumed command of the 1st Division and then in March 1916 he was appointed commander of the Anzac Mounted Division. In 1917 this division achieved great victories in the Battle of Romani in August, the Battle of Magdhaba in December, and nearly won victory in the First Battle of Gaza in March 1917.

In April 1917, now Lt General Chauvel, he became the first Australian to control a Corps in WWI when he took control of the Desert Mounted Corps and in October he was responsible for the famous Charge at Beersheeba where his light horsemen captured the town and its vital water supply in one of the last great cavalry charges in history. His troops then launched a surprise attack on the enemy to win the Battle of Megiddo.

In 1919 Lt General Chauvel was honoured with the appointment to the Army's most senior post, Inspector General. In 1923 he also held concurrently the position of Chief of the General Staff. In 1929 he was appointed Australia's first full General and retired in 1930. In WWII he was recalled to duty as Inspector in Chief of the Volunteer Defence Corps. General Sir Henry George Chauvel GCMG, KCB died on 4 March 1945 and was given a State funeral at St Paul's Cathedral in Melbourne and later cremated at Springvale Crematorium with an important contingent of dignitaries and high ranking military personnel in attendance.

Note: Licence to own required in State of Victoria, Australia.

Please note: No mail out for this lot, collection only from Sydney Office.