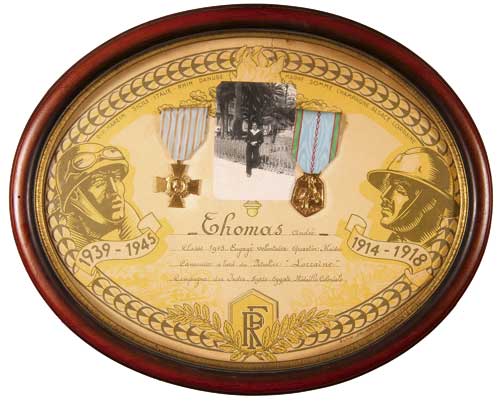 Sgt Georges Thomas, 502nd Observation Group, awarded Croix De Guerre with Bronze Star citation on 8 July 1940 by Lt Col Cottias, commanding the Air Force of Paris, in Squadron Orders with citation: 'Excellent machine gunner. Showed great courage and coolness on 30 June 1940, during a low-level reconnaissance mission over enemy territory by machine-gunning enemy posts to cover the withdrawal of his crew, whose observer had just been wounded. Had his aircraft crippled and forced to land close to the [front] lines.'

Together with a large portfolio of French language documents including the above certificates/citations, ID cards with photos, Secret Army member's card, various other photo ID cards for membership of military organisations, service records and other documents, a most comprehensive collection sorted into order in a folder, many with translation.