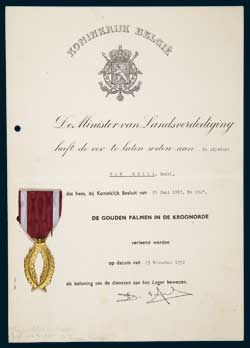 Together with certificates for all medals, various photo ID cards, photographs, certificates for various military appointments and a host of other military related documents, mostly in Dutch, one of the official languages of Belgium.

Emile Van Melle, Schepen Andrieeslaan 71, 9000 Gent, Dossier Ni.504.723 - As a freedom fighter in early 1941 was appointed as leader and organiser of several sections in Division of Leiestreek. Arrested 03Mar1943 by Gestapo being accused of being leader of the White Brigade active in the municipalities of Latem, Deurele & Drongen and took part in secret meetings as go-between at Gent - released after 6 weeks due to lack of evidence. After release was ill but continued underground activities until 08Jun1944 when again harassed by Gestapo and had to go underground until end of German occupation. As arranged by Ministry of Defence, underwent training in England as mechanic before returning to underground. On 08Jul1947 applied for invalid pension due to ill health caused by wartime activities, but rejected and as a result, there was a protracted appeal process that dragged on for years before qualifying for a war pension on 28Feb1968. The Department of Defence confirmed that Van Melle held the rank of Lieutenant in the underground movement.