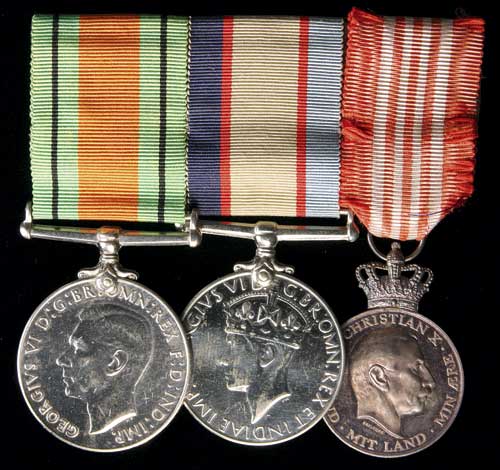 Together with box for first two medals with entitlement leaflet and original postage envelope from CARO, Melbourne; case for Danish medal; original certificate for award of Danish medal dated 15 October 1954 and named to Froken K.M.Christiansen, with original envelope and large accompanying medal leaflet; autograph book crammed full of autographs, most with service numbers, from all her postings for training and service, also some signatures of some of her patients also with their service numbers; newspaper cuttings featuring a photo of Pte Karen Christiansen AAMWS and her pet frog, Freddie, who lived in a flower vase on the bookshelf at the Regimental Aid Post at 69 AWAS Barracks, Darwin; photos in Army nursing uniform with her pet frog, Freddie, and one other at training camp; large, coloured appreciation scroll in recognition of Services in Australian Defence Forces to Karen Margaretta Christiansen, from the Shire of Frankston and Hastings.

The Danish medal above was awarded to Danes serving in Allied Forces during WWII and foreigners for services towards the Danish war effort. The award was bestowed upon VFX126287 Cpl K.M.Christiansen by Royal Resolution of the 11th October 1954 and forwarded by F.Henning Hergel, Charge d'Affaires a.i. and Consul-General for Denmark at the Royal Danish Legation, Canberra, Australia.

The above medal group is the holder's full entitlement, even though there is no War Medal 1939-45. The group is an unique trio to a Danish-born Australian. Karen Christiansen was born in Denmark but was living in Australia when she enlisted in the Australian Army Medical Women's Service (service no.V506103) on 25 January 1943. Subsequently, on 6 April 1943 she received her Australian Citizenship and on 17 April she joined the 2nd AIF (service no.VFX126287).

After applying for her WWII service medals in 1947, Karen Christiansen received a letter from the Adjutant-General, Military Board, Australian Military Forces as follows,
'It is notified for your information in connection with the institution by the King of Denmark, of "King Christian the Tenth's Memorial Medal for Participation in the War 1940-45" that, following the practice observed by the Government of the United Kingdom, Danish Nationals serving in the Australian Forces will be eligible to receive the Danish Medal, or the British War Medal, but not both, in addition to any other British Campaign Stars or the Defence Medal, for which they have qualified.

It is understood that the Danish Consul General has been in touch with you in regard to this matter and it would be appreciated if you would advise this office as to whether you have elected to receive the Danish Medal or the British War Medal, by completing the proforma enclosed herewith, and returning same to this office.'

She replied stating that she was applying for the Australian Service Medal and forfeiting her right to the British War Medal. However she did not receive any further correspondence and then in 1954 she applied again for her medals. She was finally issued with her Australian medals on 23 February 1954 and the Danish medal was issued to Central Army Records on 30 November 1954 for issuing to her. The Secretariat of the Royal Orders (Denmark) confirmed her entitlement to the award and also that she was the only Australian recipient of this medal on record and was one of the last persons to receive it, being issued so long after it was announced.

There were only 905 of these Danish medals awarded and only one known to an Australian.