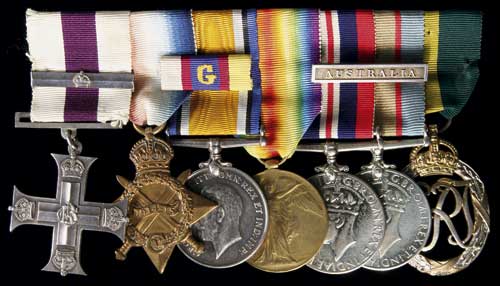 Note: Major Harburn recorded his name as Roy William Harburn when he enlisted in WWI. In some parts of his WWI service file he is referred to as W.R.Harburn and in WWII his name is recorded correctly as William Roy Harburn.

Recommendation for Captain William Roy Harburn: On the night 24/25th April 1918 during a counter-attack by his Battalion on a strong enemy position South of Villers-Bretonneux this Officer under very heavy rifle and machine gun fire led his Company against successive strong enemy positions and machine gun posts and succeeded in capturing 40 prisoners and 6 machine guns. On gaining the final position, he organised his own Company and the men of two other Coys of which their Company Commanders and most of the Officers were casualties and took command of the line, consolidating and placing it in a good state of defence. His ever cheerful manner and coolness under extremely heavy fire were inspiring to all and it was largely due to his splendid work that the attack was a brilliant success.

Recommendation for Captain William Roy Harburn MC (Incorrectly shown in A.I.F. lists as R.W.Harburn): On night 12th/13th August, 1918, during an attack on enemy position East of Etinehem near Bray-sur-Somme this officer, who was in command of the Right Company, deployed his Company well out in front of our line and did splendid work in leading his men under hostile shell and Machine Gun fire to the attack on enemy trenches. On gaining the objective he organized and consolidated the new position and at once established touch on the flanks. His excellent work and splendid initiative greatly assisted in the success of the operation. Two companies of the 51st Bn made this attack and in consequence of the determined and skilful manner in which they were led an advance of 2000 yards was made and 183 prisoners captured at the cost of only five men wounded.