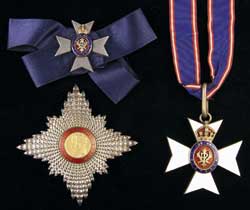 Together with Royal Victorian Order reduced size ladies breast badge; Royal Victorian Order miniature, missing ribbon; neck ribbon for KBE; Australian Diplomatic Passport D-18515 named to The Hon Sir Percy Spender KCVO, KBE, QC, issued at Sydney 23 Feb 1983; woven name badge 'Sir Percy Spender'; USA leather presentation folder gold blocked, '8-cent Statue of Liberty/"In God We Trust"/Stamp Ceremony/April 8, 1954', and at the bottom right, 'H.E. Sir Percy Spender', inside is a numbered corner block of the stamps; an accumulation of covers (approx. 200) from the private mail addressed to Sir Percy Spender which was sent to him from a wide range of countries c1950s-1980s in his various official capacities after retirement from Federal politics; the lot also includes Australia plate copy of 3 1/2d South Australia Commemorative stamp and special presentation part sets in Laos Government folders (2) with stamps c1951-2 and a presentation set from Honduras 1961 in blocks of 4 of Air Settlement of Boundary, stuck down in special prepared folder with card and details from the Director General of Posts of Honduras, lot also with many world stamps on paper and a Chinese stock book containing mint and used issues.

KBE: Supplement to LG 5/6/1952, p3046 - The Honourable Percy Charles Spender, Q.C., Her Majesty's Australian Ambassador to the United States of America; a former Member of the House of Representatives and Minister.

Sir Percy Claude Spender, KCVO, KBE, QC, (5 October 1897 - 3 May 1985), was an Australian politician, diplomat and jurist. He was born in Sydney, educated at Fort Street High School and later graduated in Law from the University of Sydney. He joined the Commonwealth Public Service in 1915, was admitted to the New South Wales Bar in 1923 and made a King's Counsel in 1935.

Spender was elected to the House of Representatives in 1937 as an Independent member for Warringah but soon after the election, he joined the government party, the United Australia Party, and although he held the seat until his resignation from federal politics in 1951, from 1944 he was a member of the Liberal Party.

Spender held a number of ministries in Robert Menzies' wartime government. He was Minister without portfolio assisting the Treasurer from April-November 1939, Vice-President of the Executive Council from January-March 1940, Treasurer until October 1940 and then Minister for the Army until the fall of Arthur Fadden's government in October 1941. He was also a member of the Economic Cabinet (1939-1940), War Cabinet (1939-1941) and the Advisory War Council (1940-1945).

Upon Menzies' return to power in 1949, Spender was made Minister for External Affairs (19 December 1949 - 26 April 1951) and Minister for External Territories. His greatest influence on Australian politics occurred during this period. He led Australian delegations to the British Commonwealth Conference in Colombo, Ceylon and to the Fifth Session of the United Nations General Assembly (of which he was the Vice-President).

At the conference in Colombo, he was instrumental in the development of the Colombo Plan (which had originally been known as the Spender Plan). He also played a large part in the signing of the ANZUS Pact and the San Francisco Peace Treaty (this was a Peace Treaty with Japan signed by 48 countries at San Francisco in 1951).

After leaving politics, Spender was appointed Australia's Ambassador to the United States (1951-58). He was the first Australian appointed to the International Court of Justice in The Hague (1958-1964) and was the Court's President 1964-67. He died in May 1985, aged 87.

Percy Spender was knighted in 1952 as a Knight Commander of the British Empire (KBE) and in 1957 was appointed a Knight Commander of the Royal Victorian Order (KCVO). In 1976 he was conferred a knighthood by the Italian Republic, namely the Order of Merit, that country's highest award. He also received ten honorary doctorates; however, a personal rift with Sir Robert Menzies prevented him from receiving the honour which he most desired, appointment to the Privy Council.