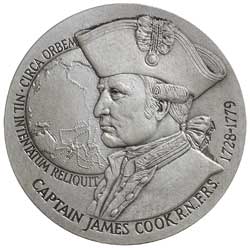 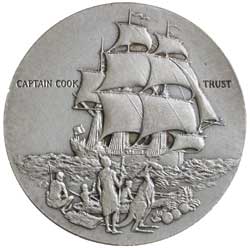 BICENTENARY OF THE DEATH OF CAPTAIN COOK, undated (1979), in silver (51mm), by Imago of Surrey, England, edge impressed HJF and hallmarked, obverse, uniformed bust of Cook left, with globe beside him and map of his Pacific exploration route highlighted, reverse, Cook's ship, Endeavour and on shore a group of natives, two in a canoe, a kangaroo and fruits, at side of ship's sails, 'Captain Cook/Trust' (Klenman 111A); another pair of identical medals (34mm), one in silver and one in bronze. The last two with some toned areas, otherwise uncirculated. (3)