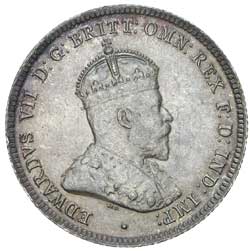 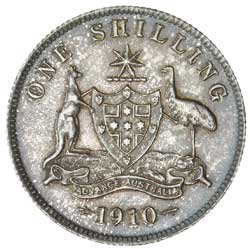 EDWARD VII, shilling 1910, with accompanying letter. Slightly touched off at the high points of the feathers, with beautiful natural toning, and virtually uncirculated, very rare and of great historical interest.

Ex Max Stern & Co Sale 25 October 1977 (lot 289).
The letter from Commonwealth Treasury/Melbourne reads 'The accompanying shilling, which is one of a parcel of 112 - the first coins issued by the Commonwealth of Australia - is forwarded to G.H.Wise Esq with the compliments of the Ministers of State for the Commonwealth. 7th March, 1910'.

George Henry Wise (1853-1950) lawyer, politician and former Postmaster General of the Commonwealth was born on 1 July 1853 in Melbourne. Educated at Scotch College, Melbourne, he matriculated in 1868. Wise then studied law and was admitted to the bar in September 1874. He then entered politics being elected to Sale Borough Council in 1880 and was Mayor on six occasions. A leading campaigner in Victoria for Federation he was elected for the Federal seat of Gippsland in 1906. Wise retired from politics in 1928 but continued to practice as a solicitor in Sale until 1948. He died there on 31 July 1950.