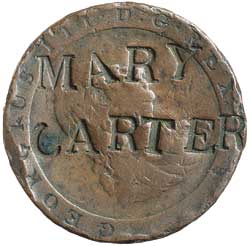 Mary Carter convicted at Middlesex Goal Delivery for a term of seven years on 15 September 1815. Transported on the Lord Melville, as one of 103 female convicts, departing 15 September 1816 for New South Wales arriving 24 February 1817 with 99 females after a journey of 162 days. Alternatively, Mary Carter of Dublin City, no trial details, sailed 8 December 1813 from Falmouth with 98 females, arrived on the Catherine 4 May 1814 and then to Tasmania by the Kangaroo. Records indicate this Mary Carter had an extensive history of drunkeness, idleness and disorderly conduct during the period 1826-1831.