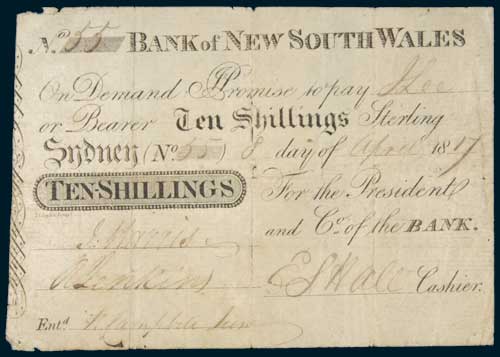 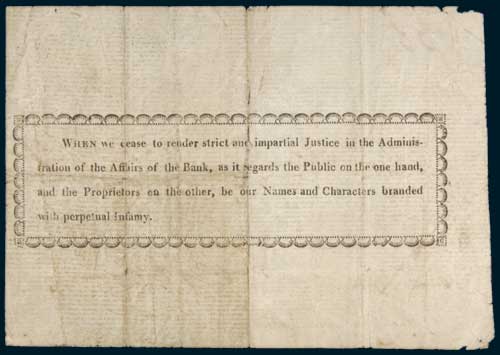 BANK OF NEW SOUTH WALES, ten shillings, Sydney, 8 April 1817, No 55, imprint S.Clayton Sculptr, payable to J.Lee or bearer, signed E.S.Hall Cashier, Entd. R.Campbell Jun., signed by directors J.Harris and R.Jenkins (MVR type 1a), tablet on back with legend. Printed at the office of the Sydney Gazette. Three vertical folds and perforations in the centre, otherwise fine and clear, excessively rare if not unique and of the greatest historical significance as a surviving example of Australia's first colonial banknote issued on the day the bank opened - the ultimate Australian banknote icon.

The unassuming appearance of this note belies its vast significance. Brought to light in recent years from a private Scottish collection, it was issued the day the Bank of New South Wales opened in 1817 and is Australia's oldest known banknote. The story behind the note follows the establishment of Australia's first bank and regulated currency issue.

Lieutenant-Colonel Lachlan Macquarie, upon arrival in Sydney at the end of 1809, was confronted with a colony in crisis. Those who arrived with the First Fleet in 1788, with only two years' provisions and without knowledge of Australian agricultural conditions, had nearly starved. Compounding the problem of basic survival was the lack of a stable local monetary system. A provisional local currency had evolved including promissory notes that were easily forged and often dishonoured, a mixture of overseas coins brought to the colony by visiting ships, and anything that could be used for barter, especially rum. As the new governor, Macquarie was given extensive powers to reshape the colony, but despite this, his first request to London to establish a bank was rejected.

In 1812, to alleviate the shortage of currency, he imported Â£10,000 in Spanish coins from India and in 1813 manufactured and issued the famed holey dollars and dumps. These efforts did little to improve the situation. The import was insufficient to meet the needs of the colony and the other prevalent practices continued, so efforts to establish a bank were renewed.

In 1816, Macquarie revived the plan, this time pushing ahead without approval from London. Upmost in his mind were the needs of the colony for a stable and secure currency to facilitate commerce and trade. At a meeting in the Judge Advocate's chambers, with 13 selected citizens, it was agreed that a bank would be established. On 22 March 1817, the charter for the first bank in Australia signed by Governor Macquarie, was delivered to the bank's President, prompting the Sydney Gazette, voicing the support of the community, to hail the move as a 'great colonial undertaking'.

Thirty-nine respondents offered to invest a total Â£5,000 of the Â£20,000 allotment after an invitation to subscribe was published in the Sydney Gazette on 5 December 1816. With the capital groundwork laid, prospective subscribers then approved a committee of fifteen to draft a corporate constitution of the bank, which was completed on 29 January 1817 and submitted to a General Meeting on 7 February. Forty-nine of fifty regulations were unanimously adopted and the remaining rule was amended. One particular rule stipulated the notes to be issued; two shillings & sixpence, five shillings, ten shillings, one pound and five pounds, signed by two directors and the cashier, and countersigned by the principal bookkeeper. The seven elected directors were D'Arcy Wentworth, John Harris, Robert Jenkins, Thomas Wylde, Alexander Riley, William Redfern and John Thomas Campbell (President and Chairman). The first meeting of directors took place on 12 February where, among other things, it was decided to appoint an engraver.

Samuel Clayton, the colony's first engraver, was appointed to produce plates for the new banknotes. As a measure against forgery and until banknote paper arrived from England in 1820, the back of each note was to be inscribed with a legend by a letterpress unique to the colony. The legend on the note being offered here is previously unrecorded and reads 'When we cease to render strict and impartial Justice in the Administration of the Affairs of the Bank, as it regards the Public on the one hand, and the Proprietors on the other, be our Names and Characters branded with perpetual Infamy.' This security measure had been established earlier in 1815 when the Sydney Gazette also printed the NSW Colonial Police Fund notes, of which only unissued forms now exist. The verse on these was, however, in Latin from Cicero. The left margin device used on the Police Fund notes is virtually identical with this note, showing wavy lines interspersed with stars, the guiding light to the colony. The border device on the back is also indentical with that on the Police Fund notes.

The final major decision regarded the place of business. A committee of three directors, including Jenkins, inspected premises offered by tender. On 6 March they selected the house of Mrs Mary Reibey (an ex convict turned businesswoman) in Macquarie Place with terms of a two year lease at a rental of Â£150 per annum.

On 8 April 1817 the Bank of New South Wales opened for business at 10am. One hundred ten shillings notes were issued on the first day. In accordance with a decision recorded in the bank's minutes of that day, all notes were made payable to 'J.Lee or bearer'. It should be noted that John Lee is listed in the Colonial Secretary Index 1788-1825 as being rewarded from the Police Fund for Â£10-0-0 on 10 February 1816 as 'a reward for himself...[for] catching two horses belonging to Assistant Surgeon Redfern' who was a founding director of the bank. It was two years before Macquarie replied to the advice from London, by which time the bank was a proven success, forcing it in 1822 to move to new and larger premises on George Street.

With a vision of the future, faith in the colony and the support of the public, Macquarie had established a great Australian enterprise, confident it would provide the solution to the currency problem in the colony. After concluding his service as governor, Macquarie regarded the Bank of New South Wales as his chief financial accomplishment, referring to it in a letter to Lord Bathurst as 'the saving of the colony from ruin'. Indeed, the immediate impact of the new bank extended beyond New South Wales - The Bank of Van Diemen's Land was modelled after the original charter and opened in 1824. Today the Bank of New South Wales continues operation after merging with the Commercial Bank of Australia Limited on 1 October 1982, becoming Westpac Banking Corporation.