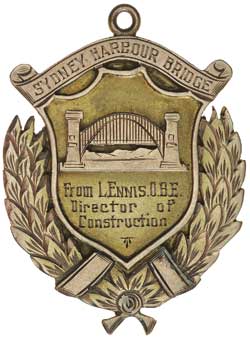 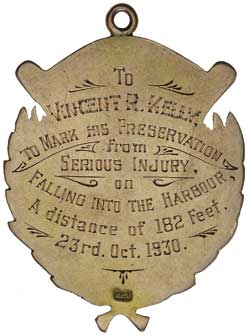 SYDNEY HARBOUR BRIDGE WORKER'S AWARDS, Arch Locked commemorative prepared from 1927 Canberra florin with obverse shaved and with rope border with scroll suspension, spanning the centre is the bridge, the arches in brown enamel, coming together with cranes atop each arch, below in a blue disc is the monogram initials DL (for Dorman Long), the inscription from top to bottom reads, 'Sydney Harbour Bridge/.Arch Locked./Aug 19. 1930./.V.Kelly./Boilermaker'; presentation fob in 9ct gold (7.7g; 39x31mm), central shield bearing overlaid image of bridge, below inscribed, 'From L.Ennis. O.B.E./Director of/Construction', the shield is supported within a laurel wreath with two ribbons across at base and across the top in a scroll is inscribed, 'Sydney Harbour Bridge', reverse inscribed, 'To/Vincent R.Kelly,/To Mark His Preservation/from/Serious Injury,/on/Falling Into The Harbour,/A distance of 182 Feet./23rd. Oct.1930'; also a WWI tribute fob in 9ct gold (7.5g; 35 x 26.5mm), obverse, target above crossed rifles, shield below with inscribed initials, 'VK', at each side a scroll with small wreath below, reverse inscribed, 'Presented to/Pte. V.Kelly/By his Woolwich/Friends/As a token of esteem/On his return/From Active/Service/13.4.18.' Good very fine and unique. (3)

Vincent Roy Kelly was born at Hunters Hill, Sydney. At the age of 18, then a boilermaker's apprentice, he enlisted in the AIF on 10 August 1916. He embarked with 17 Bn Reinforcements on 25 October 1916 and while at sea was charged with insolence to an NCO and awarded ten days detention. He served in France and then returned to Australia on 30 January 1918 arriving on 22 March. He was discharged from the AIF on 9 May 1918 medically unfit with nerve deafness.

Vincent went on to complete his apprenticeship and was employed in the construction of the Sydney Harbour Bridge. He was boilermaker of the year in 1930 and in that same year at the age of 31 he became one of only two men to survive falling into the water from the bridge. A newspaper report stated that he lost his footing while working as a rivetter on the road deck level and fell. Horrified onlookers were amazed to see him then come to the surface and strike out for a barge and clamber aboard. He was still wearing his heavy tool belt around his waist when he fell from 182 feet (about 55 metres) above the water and just before hitting the water he undid and dropped his tool belt. The heavy belt broke the surface tension of the water thus reducing the crushing impact as he entered the water. Fortunately he escaped with broken ribs and shock. A little over two weeks later, after recovering from his fall, and back at the bridge, the Secretary for Public Works M.A.Davidson presented him with a gold medal and watch to commemorate his survival.