The Tom May Collection -British Groups 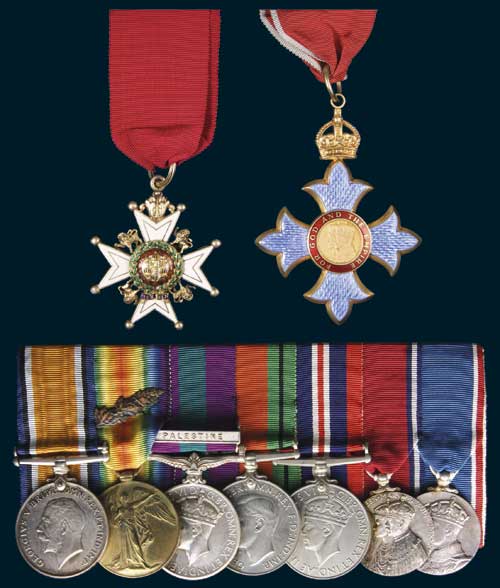 Major General Robert Walter Dickson Leslie was born on 31 January 1883 in England and was educated at Hilton College and Michaelhouse, Natal, South Africa. His grandfather was Rear Admiral F L Field CB, CMG, RN, 3rd Sea Lord. He underwent his medical training in Dublin, Ireland qualifying in 1904. Two years later he entered the Royal Army Medical Corps and held the rank of Captain when World War I commenced. In the years from 1917 to 1937 he rose from the rank of Brevet Major to Major General. For his World War I service, towards the end of which he was an Assistant Director of Medical Services (A.D.M.S.) in France, he was mentioned in despatches and appointed an OBE in the King's 1919 Birthday Honours list. In 1930 he was promoted to Lieutenant Colonel and appointed Deputy Assistant Director of Medical Services (D.A.D.M.S.) in India, a post he held until 1932. He was promoted to Colonel in 1934 and in 1936 was appointed D.D.M.S. in Palestine and Transjordania. Upon his return to the UK he was in command of the Queen Alexandra Military Hospital, Millbank until 1937. In that same year he was promoted to Major General and appointed D.D.M.S., Northern Command, York. On 28 March 1939 he was appointed Honorary Physician to the King (LG 25/4/1939, p2751). In 1941 he was appointed CB and retired from the Army. During his Army career, Maj Gen Leslie wrote several articles which were published in the Journal of the Royal Army Medical Corps. After he retired from the Army he received an appointment as a hospital officer in the Emergency Medical Service (E.M.S.) and from 1948 to 1954 was employed as a regional medical officer (No.3 region) under the Ministry of Health. For his services to the E.M.S. he was appointed CBE (Civil Division) in the 1946 New Year Honours list. He was also a member of the Council of the British Medical Association from 1942 to 1948 serving on the Naval and Military Committee of the Association from 1944 to 1948 and on the General Medical Council Committee (1946-8) and the Central Medical War Committee (1947-8). He died at his home at East Leake, near Loughborough, Leicestershire on 31 January 1957 aged 74. See article, 'A Medal for the New Bath' by Tom May, Australasian Coin & Banknote, September 2010, pp54-56, illustration of CB (this one). With research.