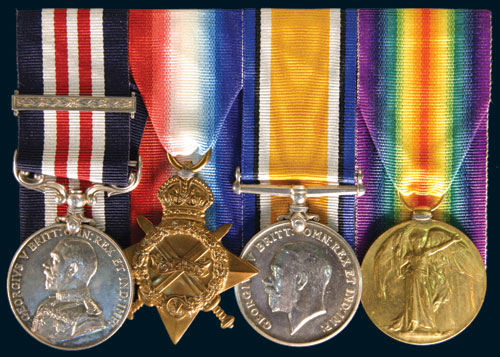 Enl.09Aug1915, RTA01Jun1919, Disch.30Aug1919, GSW right arm 15May1917. MM citation: This man is a stretcher bearer and accompanied "B" Company when the attack was made on Mouquet Farm on the night of 29/20th August. He rendered First Aid under very heavy artillery and machine gun fire. When the Company retired he brought in a wounded man and subsequently, during the same night he went out and brought in several others, to whom he had rendered First Aid, and whose positions he knew. This man displayed great bravey and coolness throughout the whole operation. L.G. 09Dec1916 p.12055 C.G. 10Apr1917 p.927. Bar to MM citation: This man is a Regimental Stretcher Bearer and is brought under notice for conspicuous bravery and determination displayed by him in bringing in wounded in the face of heavy shell, rifle and Machine Gun fire during the attack on the Hindenburg Line in front of Reincourt on the 11th April 1917 and on the following day. He showed great eagerness to go out for more wounded as soon as those brought in by him were dressed and stretchers were available for use again. He succeeded in bringing in a number of wounded even when during the period when all stretcher bearers who ventured into "No Man's Land" were deliberately fired on by the enemy's Machine Guns. He is recommended for distinction. L.G. 18Jun1917 p.6017 C.G. 04Oct1917 p.2634. With research.