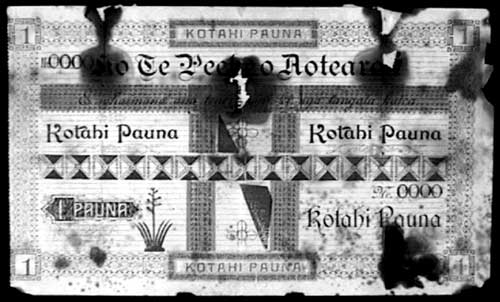 BANK OF AOTEAROA, one pound (kotahi Pouna), (Auckland), undated (1884?), No.0000, (P.S101; L.--), probably printed by the Bell Press, Auckland. This is the actual note illustrated in the book of Maori reminiscences 'Kohikohinga', published in 1929. Also the Pick plate note. Only a few notes are known, some of which are held in museums. Five main stains or burn marks on the front, three of which have holes. Repaired on the back in three places. A few pieces missing from the margins. Fair/extremely rare.

The Bank of Aotearoa was probably conceived by Maori Cheif Tawhiri (KingTawhiao) following his return from a visit to England in 1884. His portrait appears on a number of later New Zealand notes, including the Reserve Bank of New Zealand's first issue of 1934. It would appear the bank was never established although a number of notes and cheques were printed. Two varieties are known, one with three other examples are known in private hands plus three in museums. This may be the only example with '0000' serieal numbers in private hands. The Pick Plate Note - P.S101, page 796.