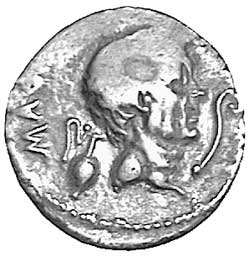 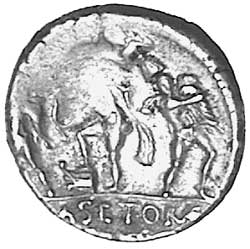 REPUBLIC, Sextus Pompey, younger son of Pompey the Great, (died 35 B.C.), silver denarius, mint of Sicily, issued 42-40 B.C., (3.9 grams), obv. bare head of Pompey the Great to right, jug behind, lituus before, MAG [PIVS IMP ITER] around, rev. Neptune standing to left with right foot on prow, holding aplustre, between the Catanean brothers Anapias and Amphinomus, each of whom bears a parent on his shoulders, [PRAEF] above, [CL]AS ET OR[AE] over [MARIT EX SC], (S.345, Cr. 511/3a, Syd. 1344). Flat for one quarter of the coin on obverse and reverse, otherwise very fine and scarce.

In 42 B.C Sextus Pompey defeated the attempt of Octavian's general Salvidienus to dislodge him from his Sicilian stronghold whereupon his troops proclaimed him the 'Son of Neptune', the theme adopted for Sicilian coinage. the title Prefect of the Fleet (praefectus classis) was that which had been bestowed by the Senate in April of 43 B.C., prior to Sextus being outlawed and eventually proscribed by the triumviral government. This issue is important in portraying a portrait of Pompey.