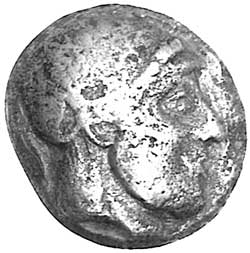 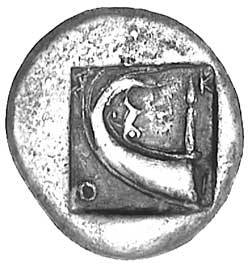 The ancient city of Scione claimed as its founder Protesilaos the leader of the Thessalian contingent at Troy. It is claimed that he was the first of the Greeks to disembark and the first casualty in the Trojan war (Iliad 2, 698-702). Scione during the time of the Delian League paid 6 talents in its annual tribute to Athens but shortly after the start of the Peloponnesian War the city revolted against Athens and opened its gates to the Spartan general Brasidas in 423 B.C. The city inhabitants were later all massacred by the Athenians in reprisal. The head of Protesilaos on the obverse is confirmed by him being named on the helmet and the reverse further alludes to Homers account of the bravery and death of this great Greek hero.