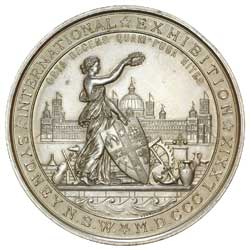 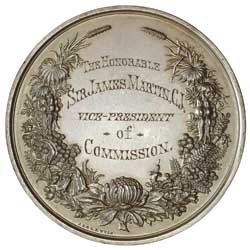 SYDNEY INTERNATIONAL EXHIBITION, 1879, in silver (76mm) by J.S.& A.B.Wyon, inscribed on reverse 'The Honourable/Sir James Martin, C.J./Vice President/of/Commission', no stop after CCC in date. Edge bruise on obverse at 2 o'clock, otherwise nearly uncirculated and extremely rare in this metal.

Sir James Martin (1820-1886) born Midleton, Cork, Ireland, 14th May 1820. Emigrated to Australia with his family in 1821. Educated at a Dame's school in Parramatta and later at W.T.Cape's school 1833-36. He became a journalist with the 'Australian' newspaper, and was acting editor in 1839. After studying law he was admitted a solicitor in 1845. He helped draught the New South Wales Constitution, also sponsored the establishment of the Sydney Mint. He became Attorney General in 1856, elected Fellow of the University of Sydney in 1861 and Premier in 1863. He was appointed Chief Justice of New South Wales in 1873. Martin Place in Sydney was named after him.