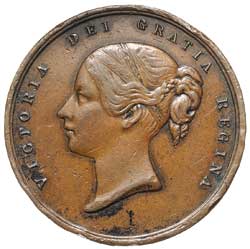 A similar example in silver from our Sale 63 realised $9,500 (lot 528) and there wasn't a specimen represented in the most important Dr. John M.Chapman Collection. In 1856 Julius Hogarth of the Sydney firm Hogarth & Erichsen, was commisioned to cut dies and strike medals - six gold, six silver and twelve bronze - for Major General (later Sir) Edward Macarthur, Lieutenant Governor of Victoria and eldest son of wool pioneer John Macarthur. Ludwig Becker, the German artist, who died five years later on the Burke & Wills, expedition, had a hand in designing the medals. They were to be awarded 'for distinguished merit in the arts, either of peace or war'. James Macarthur of Camden arranged the whole transaction which cost œ300. The motto in Latin reads 'either in war Victoria or in peace', the first motto of the colony. (Myatt, Australian Coins, Notes & Medals, Sydney 1980, pp 177-8).