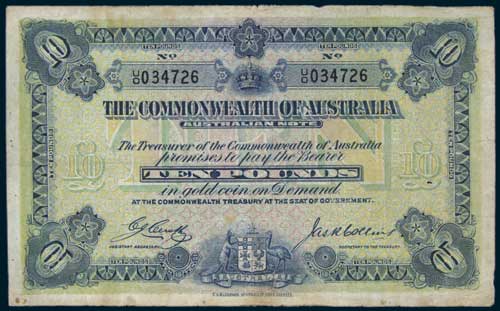 TEN POUNDS, Cerutty/Collins (1924) U/0 034726 (R.52d). Natural colours with pin-holes, some edge creasing and minor tone spots, otherwise very good to nearly fine and the only known example, a recent discovery confirming the existence of this variety mentioned on page 198 of Vort Ronald's, Australian Banknotes second edition 1983.

The archives of the Commonwealth Bank record that 39,188 notes of the "old design" were issued with serials U over O. Saved by a reclusive Chinese man in his sock and passed on to his adopted family.