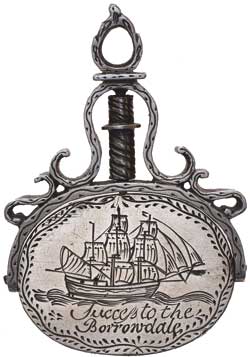 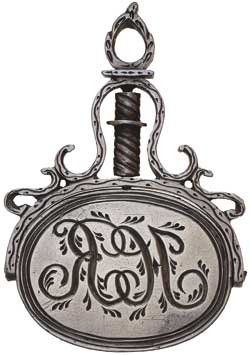 THE BORROWDALE SEAL, of Captain Hobson Reed, 1787, a small (44mm x 30mm) hand-made oval fob seal in silver, fitted into a swivelling suspension to enable impressing of seal, with leaf decorated, scroll mounting suspension loop together with fitted screw for securing into rim of seal to stop it swiveling when not in use, obverse of seal features an engraved ship under sail upon waves, below inscribed in running script, `Success to the / Borrowdale', wreath of leaves around, reverse, inscribed with monogram initials `RH' (in reverse so they will register HR when used as seal) decorated with sprigs of leaves and around rim with leaf decoration. Extremely fine and a unique piece of Australian First Fleet history.

Provenance : Discovered in 1999 at an antique jewellery shop in Dorset in the historic Saxon town of Wareham, famous for being the burial place of Lawrence of Arabia.

The Borrowdale was one of the three supply ships with the First Fleet of eleven ships that sailed from Portsmouth, England on 13 May 1787 under the command of Captain Arthur Phillip. The voyage to Australia took over eight months with the first ships arriving at Botany Bay on 18 January 1788.

This site was decided to be unsuitable for establishing a settlement so the fleet traveled a short distance north and after entering a quite cove with an ample supply of fresh water decided that this was to be the chosen site for the new convict settlement and it was named Sydney, in honour of Lord Sydney.

The Borrowdale was a fully rigged wooden sailing ship of approximately 270 tons built at Sunderland in 1785. She was seventy five feet long with a twenty two feet beam and carried twenty four passengers and crew. The owners were Leightons. Contracted by William Richards Jnr, the fleet contractor, she was under command of Master, Captain Readthorn Hobson Reed and Second Mate was William Richards.

In internet notes from David Hill, `1788 - The Brutal Truth of the First Fleet' the following specific mentions are made relating to the Borrowdale;

a) During the voyage to Australia, Borrowdale lost sail (foretop-gallant-mast) on 26 July.
b) She lost ship's boat in October in rough weather near Penguin Island.
c) Report of livestock losses, especially chickens from disease, 16 November.
d) After leaving Cape of Good Hope the fleet split with Borrowdale staying with slower half under command of John Hunter.
e) Arrived with slow half of fleet at Botany Bay on 20 January one day after faster half of the fleet.
f) On 4 June participated in ceremonies staged for King's birthday. `The King's ships, Sirius and Supply, fired twenty one guns at sunrise, at one o'clock and at sunset. Immediately after the King's ships had ceased firing at one o'clock, the Borrowdale, Friendship, Fishburne, Golden Grove and Prince of Wales fired five guns each.'

Borrowdale departed Sydney on 14 July 1788 for England as one of the ships in government employ for the round trip under the direction of Lieutenant John Shortland, agent for the Transport Department. The other ships in the convoy were Alexander, Friendship and Prince of Wales. Because it was winter and because they were unable to take fresh food from Sydney, as there was none to spare, the ships decided to head north where the prospects for taking on fresh food were greater. Two days out from Sydney bad weather and heavy winds struck so all four ships separated. Borrowdale abandoned the northerly route and headed south under New Zealand and then on to Rio de Janeiro. By the time the ship reached Rio five sailors were dead and the other sailors were so weakened by scurvy that the harbour master and other sailors at Rio had to board her to bring her in to berth. The Prince of Wales carrying Lieutenant Shortland also reached Rio. After signing on additional fresh crew, the Borrowdale in company with The Prince of Wales set sail for England with the Borrowdale arriving on 26 March, two days after her sailing partner, thus these two becoming the first of the First Fleet ships to return. Borrowdale carried Governor Arthur Phillip's dispatches including voyage details, and details of the Sydney site and conditions.

A copy of the dispatches were sent to King George III. News of the ships' return from Australia attracted widespread coverage in the newspapers. However, after the dispatches carried by the Borrowdale were released, far more detailed stories appeared in the newspapers The Borrowdale had a short life after this. Seven months later on 30 October 1789 she sank in a massive gale off Great Yarmouth, Roads, Norfolk with all hands lost except one. Who was this one? Was it the captain, Hobson Reed? No records of a name can be found but no matter what, Captain Hobson Reed appears to have made the return voyage to Australia as Master of the ship Borrowdale and the fob seal probably sailed with him.

At the time of the First Fleet voyage, in the late eighteenth century, it was not uncommon for new ships and significant voyages to be commemorated with a special item bearing the words 'success to the (name of the ship)'. In the book, 'Forget Me Not' by Sim Comfort, three such coins are illustrated, 'Success To The Nancy' on pages 15 and 16 for the period 1760-1780 and 'Success To The Mercury' on page 100 and 'Success To The Old Lion' on page 111, both for the period 1787-1790. Another coin depicting the convict ship Friendship with similar engravings to the Borrowdale seal is held by the National Maritime Museum, Greenwich, London (Item No.E4938-1/2). This exhibit features a ship under sail upon waves and below the inscription `Success to the Friendship / 1787' and on the reverse the initials `FW' (Francis Walton, Master of the Friendship). Floral decoration also appears on the reverse of this coin and this is a theme which appears on many of the known 'Success to ..` commemorative pieces. Being almost identical it is speculative, but probable, that the Borrowdale seal was commissioned by Hobson Reed's wife or the ship owners' as a commemorative of the historic voyage to Australia. The will of Hobson Reed dated 12 December 1786 was proved by his widow on 28 January 1790 so obviously Hobson had died around that time. Therefore, was he the one survivor of the Yarmouth Roads sinking? There are many questions to answer but ultimately the Borrowdale fob seal found its way to the Wareham antique shop and the rest is history.

Together with considerable documentation including a photocopy of the will for Hobson Reed, Mariner of Saint Paul's Shadwell, Middlesex and a comprehensive research paper titled, 'The Borrowdale Seal' by Miles Stevenson.