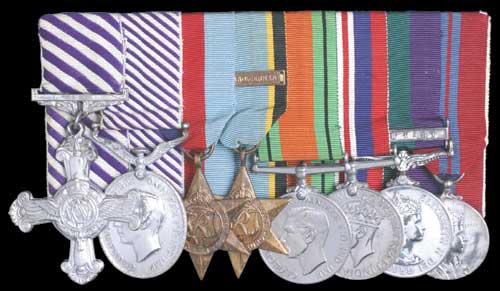 DFC: London Gazette 16 February 1945. 'For gallantry and devotion to duty in the execution of air operations. Since the award of the Distinguished Flying Medal, Flight Lieutenant Highet of 635 Squadron has continued to maintain a high standard of skill, determination and devotion to duty. He has participated in many arduous operations with great courage. His untiring efforts and fine fighting spirit have set a magnificent example to all in his squadron.'

DFM: London Gazette 26 June 1942. 'For gallantry and devotion to duty in the execution of air operations in 115 Squadron. This N.C.O. has carried out thirty-four operational sorties as First Wireless Operator since July, 1941. During the nine months Sergeant Highet has been engaged on operations, his crew has attacked several long-distance targets under most trying weather conditions. When navigation without a first class radio operator was almost impossible, Sergeant Highet's skill in obtaining M/F fixes and loop bearings from various Continental broadcast stations played a major part in the continued safe and apparent effortless return even under the most trying conditions mentioned above. He is an airman of initiative and resource who has carried out his duties with the utmost efficiency.'