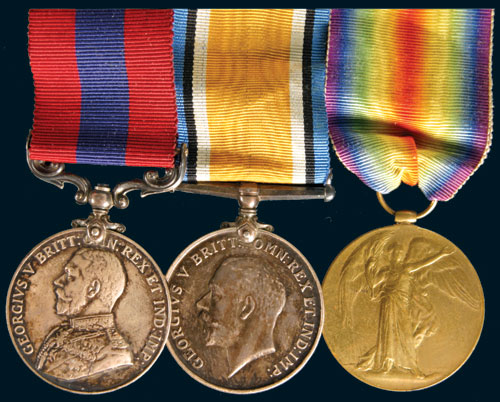 Sergeant Frederick Cecil Cullingford served four years with the Senior Cadets attaining the rank of 2nd Lieutenant when seconded to A.I.F. Enl. 19Jan1916 at RAS (Royal Agricultural Society) Gardens aged 18, Emb. 14Apr1916, promoted to Corporal 03Jul1917, promoted to Sergeant 01Sep1918, WIA 30Sep1918 (severe bullet wound to chest), RTA on S.S.Mamari 21Dec1918, Disch.08May1919. Recommended for MM upgraded to DCM by Divisional Commander. DCM gazetted L.G. 03Jun1919, C.G No. 109 15Sep1919. Recommendation for award, "For conspicuous gallantry during the operations near Bullecourt between the 29th September, 1918 and 2nd October, 1918. During the attack on Le Catelet Trench System when most of his platoon had become casualties he rallied the remainder and organised them as a Bombing Squad which successfully bombed along the trench for a considerable distance. On another occasion he led a charge against a party of the enemy who were counter attacking, dispersing them and allowing the advance to continue. This N.C.O. has served with the Battalion since October, 1916 and has taken part in nearly all operations in which the Battalion has been engaged. He has always shown the utmost bravery and determination and remarkable powers of leadership and control." Together with metal Wounded Stripe and silver cigarette case bearing the initials "FCC" on the lid. Accompanied by research. Also see lot 4294.