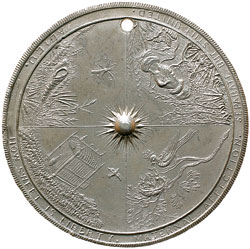 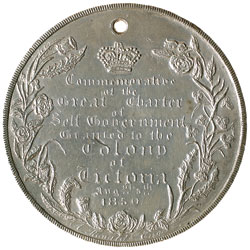 SEPARATION OF VICTORIA, 1850, in white metal (51mm), plain edge with milled rims, holed above crown as issued by A.Ronalds Engr (C.1850/1), obverse, a circle divided into quadrants, with heavily embossed sun at centre. The mottoes of the symbolic quadrants designs are opposite them in a peripheral annulus, they read Maternal Affection-Adieu-How Sweet is Liberty-Separated But Still United, reverse, Commemorative / of the / Great Charter / of / Self Government / Granted to the / Colony / of / Victoria / Augst. 5th / 1850, surrounded by a wreath of British emblems, rose, thistle and shamrock, divided by a crown above. At the base in small script, A.Ronalds Engr. Finest example known, extremely fine and extremely rare.

Ex Ray Jewell Collection. Alfred Ronalds (1802-1860) born in London, immigrated to Australia arriving in Williamstown, Victoria, February 1849 wiith his six children. He proceeded to Geelong and within a short time set up his business. Placing advertisemnts in the 'Geelong Advertiser' his first entry being 'Alfred Ronalds, Draughtsman, Engraver and Copper Plate Printer'. He brought with him from England the equipment he needed for this business venture. On the 11th November 1850 the vessel 'Lysander' brought news to the residents of Port Phillip that they had been granted separation from New South Wales. The Separation Act had been passed by British Parliament on 1st August and received Royal Assent on the 5th August. From the 1st July 1851 the Port Phillip District was to become the separate Colony of Victoria. Ronalds was inspired by this news, he decided to produce a medal as an everlasting memento of the birth of this new Colony. It was purely a private commercial venture without official sponsorship. The simple but effective drop hammer process must have been used to strike the medals as there was no coining press in Australia, much less Geelong. The number struck is not known, however the great rarity of this piece would indicate it would have been minimal. This was Alfred Ronalds first and only medal production. The first medal struck in Australasia and is so rare with no recorded sale other than this piece being offered can be found in the last sixty two years.